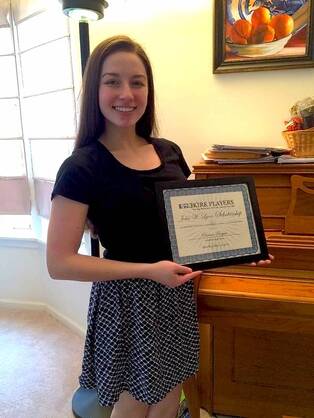 The Kirk Players have had a long-standing business relationship with Mundelein High School, so the organization developed the criteria for the John W. Lynn Performing Arts Scholarship ("JWL Scholarship") and installed the program, honoring its first recipient, Brianna Sprague, in 2000. Being able to reward young people who have achieved the highest levels in the worlds of theatre, music and dance, as well as academics and community service during their high school career, is a gift in itself!" said Mr. Lynn.

In 2012 the scholarship was increased to $1,500.00 and expanded to include students at Carmel Catholic High School. The commitment that Carmel has to the arts is demonstrated by the new construction of a Information Commons and Fine Arts wing on campus. "We are gratified to see the commitment that the Carmel community has made to the arts" said Sheila Bourque, President. "Theatre, visual arts and music will all have new and improved performance, practice and storage space. Our scholarship expansion will demonstrate to the students and their families that the larger community of Mundelein recognizes and appreciates the contribution this makes to our Village as a whole".

On August 27, 2013 we lost our Founder, Director, and long time leader. This scholarship continues in his memory.